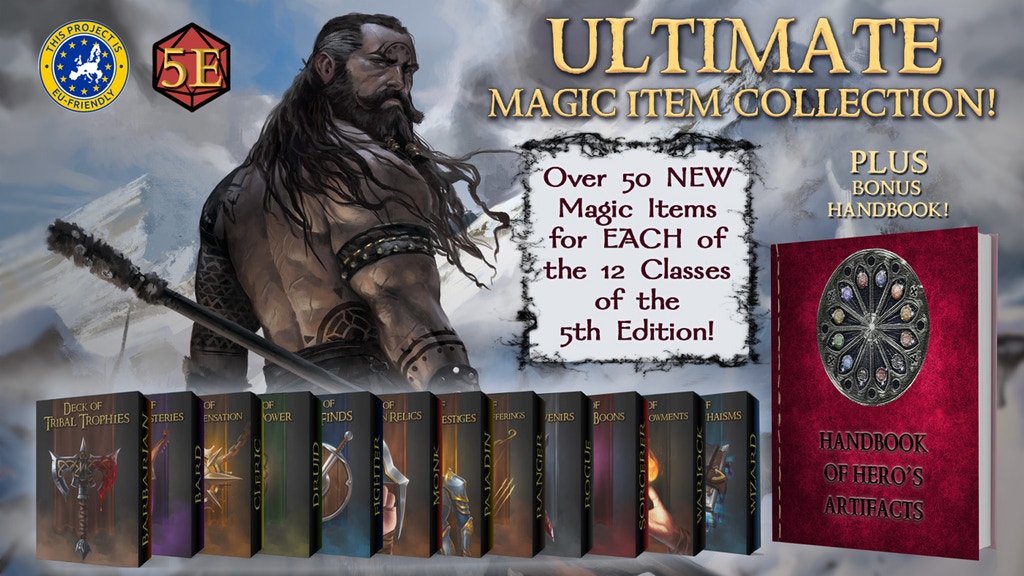 All-new, unique magic items for EACH of the 12 core classes of the world's most popular role-playing game - with all original artwork!

Latest Updates from Our Project:

Just a quick update until I can get you all something better, I have been making an emergency move across the country and settling in with my internet only being set up today! That said we are behind schedule because mostly of me, during the move it was decided that I would be going full time on Session Zero Games so that I could provide better products at a faster rate than was possible in our last location with my full time job taking up 50 hours or more a week of my time.

All Other Decks 25% (ART IS FINISHED ON ALL DECKS, writing needs to be finalized)

We are finished with the Cleric deck minus a single card, I'm going to be finishing that tonight and punching through the second half of Druid and finalizing the Fighter deck by next week. I expect to accelerate delivery of class deck PDF's greatly and have hired a secondary writer to assist with them as well so we should be moving MUCH MUCH faster than before.

The full book or the complete deck list can not be delivered until each individual deck is done, for those that are asking about when they should have their Book PDF in hand it won't be until we get all of the work done, that will be the last thing we can do.

That being said we are behind schedule right now, we were hoping to have all 12 decks complete in a digital format and begin laying out the book by this point, we're not there yet. This is an amazing project with 3x the amount of work that was needed for our last big magic item release (and that took us 1 year!) and we're going to be cramming that much extra work with the same quality in 1/2 the time frame. We're on this, you guys just kick back and keep an eye out for emails and updates!

Thanks for your support, when I get more time to give you a more complete update with better time lines and some more links to new items that have been finished you'll have a better look at what our new delivery schedule will be.

So, we're finally caught up and pumping out fully completed cards as fast as we can :) We've sent out releases to backers who pledged for the Print and Play copies of the Barbarian Deck along with those who pledged for ALL of the Print & Play decks, you should have an email from BackerKit with a link allowing you to download the Barbarian items now. As they are finished we'll be sending them out to everyone here in only the PnP format since the book will be a single collection of all the decks, there won't be minor releases of individual decks in book format so if you're holding out for the whole collection keep your eyes set on the end of the year.

We're doing what we can to make sure the completed Heroes Handbooks are in hand as soon as possible so we'll keep our nose to the grindstone until we get it done!

If you're interested in how our latest project is going we're still 11 days from ending and we've just broken our first stretch goal and unlocked 2 new items which are themed for Christmas Horror! Below is one of the awesomely terrible things we'll be including in all of the decks and books printed for the Cursed Collective, if you want to check it out you can get the PDF for only $10 on Kickstarter now!

More updates as we get more decks done, we'll be sending out the Bard next so watch out for that soon!

I hope everybody is having an excellent month so far :) Below is a short bulleted list of the things we'll be going over in this update so you can jump through bold headings and find what you're interested in! I hope having updates like this helps since we can include lots of stuff into one big email that you see instead of a lot of little ones through the month.

If your friends missed out on our Decks of Adventurer's Allurement (which are class based magic items for 5E) then you have the opportunity to share the Pre Order store with them by using the link below. I wanted to share with you the progress of the project along with some previews of what we're doing that separates them from the universal items we made for the Magical Mystery line.

The class decks themselves all revolve around magic items that are curated by special "class ambassadors" that each have their own style and appeal. Think of them as the highest level most powerful person in a certain class looking back on their favorite items and detailing why they're useful to your specific character class. You'll find on the Barbarian cards some references to "Skyos" the Barbarian Half-Dragon who curated the barbarian list along with a card dedicated to some story about that person.

Each class deck has cards that are universal, a handful which don't specifically reference something like "Rage" for a barbarian but most of the cards full benefit will be specially suited for the class it's made for. A Rage Forged Torch is still an Ever Burning Torch for anyone who would need to use it but in the hands of a Barbarian it becomes transforms from a useful if mostly harmless item into a weapon of pure burning fury!

There are going to be items as we said that are universal and part of what we're doing with these is making sure the theme is still 100% fitting for the class it's made for BUT also brings something to the table for those who might not specifically have a Barbarian (or other class) ability. In this instance you'll see the usefulness for many classes built into the Chaos Cleaver below :)

Now that you've seen a few of the cards for the Barbarian deck let me break down exactly what it is you're looking at so that each other deck might make more sense.

You'll find that each card has it's own style of with a color coding, a symbol and different narrators each with their own way of telling about their favorite or most useful items. The book will have further expanded areas with each "chapter" being a full introduction to the character narrating the deck and followed by the entire deck at length with each page showing off 2 items with full story and mechanics.

So, as you can see these will be very different than the much more standard and universal items found in the Tome of Magical Mystery, be sure to pick up the pre-order and you'll receive your items when the rest of backers do as they all ship out! PDF's are expected to be delivered as they get finished, Barbarian/Bard/Cleric may be done as soon as Halloween and the rest will quickly start rolling out now that we've got all of the templates set up and 500 of the 600 art pieces finished! We are doing everything we can to get all of this ready for a PDF release to everyone in early January and the prints out as soon as they show up after that. https://doaa.backerkit.com/hosted_preorders

Deep Dungeon Games is in the final 24 hour stretch for funding and has already hit the $30,000 stretch goal which blimps the book up with an additional 70 pieces of art! It's going to be about 175 pages already including 200 consumables, hundreds upon hundreds of custom pieces of art and ridiculously fun flora to bloom throughout your world and bring it to life like never before!

Go check it out now and get the PDF at least, it's worth EVERY PENNY at only $15! Use the link below or click the images to go visit the Kickstarter now while you still can!

Small update on this one for now but WE'RE FUNDED! We've hit that $5000 goal to get things, made, we're now pushing towards our first stretch goal to break $10k and add a couple more wickedly cursed items to add a little Christmas Fear to your holidays :) Check out the link below to look at our special Halloween Themed deck of cursed magic items!

More updates as we get further with items and we'll let you know if and when we release the early PDF of the decks as we get them ;) We're going to be knocking them out fast from this point forward!

Our special Halloween project has launched!

Click the image or the link below to go check it out now and find a new way to add some cursed items to your game that will force your players to think outside the box! If you're clever, you can figure out how each one could be useful in one way or another ;)

Click on this link now to watch the Average Adventurers go over the entire Tier 2 Deck of Magical Mystery, please share your stories and interact with us in chat! THESE GUYS ARE HILARIOUS!

If you will share your favorite story of when you were playing a character who did something AWESOME in the game you'll be entered to win a full set of Tier 1-4 Print and Play PDF's of all 4 of the original Decks of Magical Mystery (A $40 value)! If you already have those and you win just let them know and I'll send you something else of your choice!

We will also have them at the end of the stream show off the first preview of our new Kickstarter releasing next Tuesday on October 1st!

Do not forget the Harold the Halflings Herbology Handbook!

Harold the Halfling's Herbology Handbook is an all-new RPG supplement with 70 different types of in-game flora ready for any fantasy-based tabletop game. This compendium, cleverly narrated by Harold himself, focuses on the types of flora your adventurers will commonly encounter: trees, fungi, crops, fruits, vegetables, and more, detailing their origins, environments, and uses.